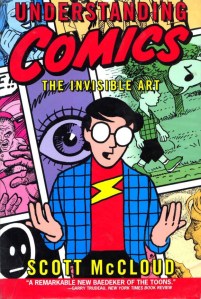 I think that at some point I was referred to this book (Understanding Comics), but I never got around to actually reading it. For quite a few years I’ve struggled with creating comics, even though they are one of my favorite forms of media. Maybe this book would be the much needed jump start to my own creations, and the oil to my gears in story creation.

The discussion of different types of transitions in comics has never been brought to my attention, and I haven’t given them much thought. But after reading Blood in the Gutter I’ve realized just how important they are. Especially on page 142 where McCloud says “Ever act committed to paper by the comics artist is aided and abetted by a silent accomplice. An equal partner in crime known as The Reader’. I haven’t considered the readers involvement in a comic’s reception. I mean, I know that every reader would interpret the information differently, but not in the way McCloud has explained.

Allowing and accepting that the reader will and probably should fill in the blanks between frames is something I now believe is important in comic arts. Giving that kind of freedom to the reader makes them more involved with the story, instead of handing it to them on a silver platter. Everything on that silver platter would be boring and not worth the reader’s time. It’s better to let them find the sweets that fell between the plates, than present them with an overwhelming cake straight to the face.

“Just as we all assume every day that there’s more to life than meets the eye; all I ask of you is a little faith and a world of imagination.” – Scott McCloud.

One thought on “‘Blood In The Gutter’ Response”